Bulbmin are a parasitic species of Pikmin that resemble bulborbs, hence the name. An adult Bulbmin, resembling a Red Bulborb, is followed by up to ten juvenile Bulbmin, which resemble Dwarf Red Bulborbs, both with a stem atop their back. They wander about, patrolling an established path. The adult Bulbmin is quite aggressive, and when the adult Bulbmin is defeated, the juvenile Bulbmin will panic until whistled, at which point they will join the leader's squad. At this point, they can be used like normal Pikmin. They are resistant to all fire, electricity, water, and poison. As beneficial as their abilities may seem, they cannot leave the caves with the group, for an unknown reason.

This is where users type their version of Bulbmin.

In Pikmin 3 (Flish version), Bulbmin are seen outside of the bulborbs and serve as enemies that attack leaders. Other Pikmin do not attack them and they do not attack Pikmin.

In Pikmin 4 (Wii U), Bulbmin seem to have adapted to living outside of caves. They are first found after defeating the Giga Bulborb on the first day.

Bulbmin in Pikmin 3: The Dweevil's Revenge are the same as in Pikmin 2 except that there is a new type of Bulbmin, the Orange Bulbmin. Also, Bulbmin are resistant to ice, but not quicksand.

In Pikmin Kart, Bulbmin are items that are rarely found from item boxes. After being thrown, they grab onto a random kart in their range. They'll slightly slow the kart they bit onto, but it is possible to shake them off. They won't fall off if the driver drives into a fire geyser, a body of water, electrical wires, or gas pipes. As with all Pikmin items, the Whistle item can protect a player from Pikmin attacks and steal them for themself.

In Pikmin SP, Bulbmin are the same as the ones from Pikmin 2, but there is a larger variety of them. They can also be seen aboveground and every type shares a single Onion. The Onion is found in the Leafy Grotto, the second cave in Dim Jungle. Once their Onion is obtained, they may be taken aboveground. 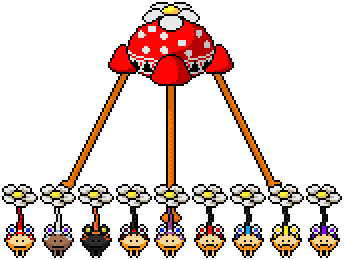 Below is an explanation of what each type does:

In Pikmin: Another Adventure

In Pikmin: Another Adventure, Bulbmin are actually just bulborbs but with a parasitic Pikmin inside of it. It has many immunities and lives only underground.

“Finally having a bulborb on my side changes a lot of things, and, as well, allows us to have more research without our face being eaten off.”

“They give me the creeps.”

“Investigating these guys allowed me to find that there is more to them than what I thought, though there is still much research to discuss!”

Bulbmin, in Pikmin: Attack of the Breadbugs, have the same role as they did in Pikmin 2, but they and their respective Onion can be found in the Hidden Territory of the Land of Wonders. Only juvenile Bulbmin are present. As before, Bulbmin are immune to all elemental hazards. However, Bulbmin cannot be accessed until Purple Pikmin are found, as only Purple Pikmin have to ability to demolish reinforced gates. Bulbmin can be extremely useful for destroying the Galactic Breadbug if chosen to be used. However, Purple Pikmin are still mandatory, as only they are able to deplete the Galactic Breadbug's health while it is in its stone form.

Bulbmin have been given a major redesign for Pikmin: Colonies; they can be found almost anywhere and travel anywhere, come in eight colors, and are much more numerous. Read more here.

In Pikmin: The Pollution

In Pikmin: The Pollution, Bulbmin is a term for enemies that have killed a Green Pikmin and are transformed into a Pikmin similar to their species.

In Pikmin: Revenge of the Darkfreeze

Bulbmin in Pikmin: Revenge of the Darkfreeze are the same as in most games, but have a more orange stem and a yellow flower.

In Pikmin: Ultimate Doom, Bulbmin act the same as they did in Pikmin 2. They can be found in sublevel two of Treacherous Complex, and sublevels five and seven of Perilous Cavern.

Juvenile Red Bulbmin have no specific resistance to any hazard and can't latch onto their targets in the usual way, but they are very useful in combat. They can hit with their stems for normal damage, but throwing them at enemies is their optimal use. When thrown at an enemy, a juvenile Red Bulbmin can either simply bounce off of it for low damage, or bite onto it and hang on until shaken off with sufficient effort. Juvenile Red Bulbmin inflict above-average damage to their target so long as they are latched on, making them useful as a persistent source of damage. Note that this special biting attack can only be used on fleshy enemies Pikmin can normally latch onto, and a thrown juvenile Red Bulbmin will perform a special action and emit a special sound as it prepares for a biting attack. Other than its special attacks, juvenile Red Bulbmin have average digging speed, mobility, and throw range. Much like adult Red Bulbmin, the juveniles sound like Red Bulborbs, although much higher-pitched. Additionally, a single juvenile Red Bulbmin cannot carry an object, merely struggling to lift it up or grab onto it with its mouth, but it can carry an object with the help of another Pikmin or juvenile parasitic Pikmin host. Even then, however, there are some parasitic Pikmin hosts that cannot carry any objects whatsoever due to their physiology, so they cannot help in such a case. The juveniles can be brought to the surface from a cave they are found in, and they can be stored in the PikHold, if it was collected, no matter where they are found. If the PikHold has not been found, the juvenile parasitic Pikmin hosts inevitably left behind at the end of the day do not count as Pikmin deaths. Needless to say, being a parasitic Pikmin host, Red Bulbmin do not have their own Onion, and they cannot be produced from any kind of Candypop. They can, however, be thrown into a candypop to turn them into other Pikmin. This is untrue for the adults, as any candypop one finds itself in will bounce the creature off of itself. Juvenile Red Bulbmin can die even when under the command of an adult parasitic Pikmin host, although such occurrences are highly unlikely and will not count against the total amount of Pikmin deaths.

Red Bulbmin greatly resemble Red Bulborbs, but smaller in size and with a red stem protruding from their back. Adult Red Bulbmin are slightly smaller than half the size of a Red Bulborb, and the juveniles are a fraction of that size. They possess the typical bulborb characteristics, having a tapered snout, light skin, and a red rump with white spots. Sprouting from their back, towards where their face color transitions to the crimson hue of their backside, is their stem. On the end of their stem can be a large leaf, bud, or flower, the latter two having gray petals, with the flower having a yellow center. Their eyes differ from that of Red Bulborbs because, although they are mounted on eyestalks and still possess white sclerae and light blue irises, they have gray pupils, indicative of the influence parasitic Pikmin hold over them.

Although they are smaller than an ordinary Red Bulborb, adult Red Bulbmin can still pose a threat, especially if their wandering allows them to catch a leader or their Pikmin off-guard. Charging Pikmin at an adult Red Bulbmin is only a good idea if it is asleep, and even then the commotion caused by the juveniles sensing danger would wake it up quickly. While it is awake and active, Pikmin can be thrown at the eyes of an adult Red Bulbmin to inflict damage to the creature, make it flinch, and cause it to spit out any Pikmin it may have in its mouth. Upon death, an adult Red Bulbmin will drop to the ground and yield

× 5. Its body can be taken to the Lander Pod to either gain

× 4 or be stored to receive seven Pikmin seeds of choice from the Master Onion, but only if the cave is exited using an escape geyser. Because they are parasitic Pikmin hosts, Red Bulbmin, whether adult or juvenile, release a soul upon death that resembles a fusion between that of enemies and that of Pikmin.

“The red bulbmin is the most well-known example of Pikmin taking advanced measures to survive, by overtaking a host's immune system and using their body for their benefit. The red bulborbs they control are diminished in size, seemingly a common side-effect seed in many parasitic Pikmin hosts.”

“Pikmin seem to be very creative in surviving on this planet. I'm glad I have employees as resourceful as the Pikmin! At least, I'd imagine they are...”

“While the adult red bulbmin deliberately resist the call of a whistle and can be hard to befriend because of this rebellious habit, the juveniles listen incredibly well. I would imagine they would, assuming they follow their parents around as protection. The juveniles are quiet and peaceful, but just like their parents, they grow up to be rebellious.”

“Remove the stem, and grind the meat together with salt and any spices of choice. Stuff the ground meat into sausage satchels, and pan-fry them in oil, with diced onions. Smother them with mustard and horseradish before serving.”

“I wonder, what does it feel like to be trapped inside of your own body, which is being controlled by something you can't even fight off? It must be a dreadfully miserable experience... Wait, who am I posing that question to?”