Captain Hunnigan is a special Captmin encountered in Ancient Metalworks in Pikmin: Wide World. Marie offers to tell what she knows of Captain Hunnigan, due to him being a Captmin and thus unable to express anything more than any other Pikmin could. The data file Marie finds on him when Captain Olimar and Shacho visit the ruined campsite offers only minimal insight into Captain Hunnigan's personality.

Hailing from Hocotate, Captain Hunnigan possesses the same minuscule stature as others of his kind. He has a muscular build, a light skin tone, blue eyes, and gray hair. Mint is his signature color, it being the color of his remaining glove, his backpack, and his white spacesuit's miscellaneous details. As a side effect of the mortal wounds inflicted upon him, his helmet is shattered to pieces with only a few fragments remaining and his beacon missing, and his dirty spacesuit is ripped and torn in several places.

According to Marie, Captain Hunnigan's exceptional leadership skills rivaled those of Olimar. Hunnigan was a heroic, strong, intelligent, and level-headed individual who was a friend to all. Many looked up to Captain Hunnigan as a role model and an idol, including Marie. His heart went out to those around him, and he was especially protective and supportive of his crew. He always encouraged them to be strong, courageous, curious, explorative, and always willing to work with others as a team. He fought fiercely to protect the precious lives of his twelve crew members when they were attacked one fateful night but ultimately fell alongside them.

Captain Hunnigan was directly contacted by the Hocotate government through a letter, asking if he would be interested in leading a small group of twelve of Hocotate's finest students on an expedition to a mysterious planet named PNF-404. The letter further stated he would be using a government-provided spacecraft, the S.S. Dreamstride. He enthusiastically agreed, and before he knew it, he had his entire, equally enthusiastic, crew under his wing. Everyone on the expedition crew underwent rigorous training to prepare them for deep-space travel, cramped quarters, and exposure to zero gravity. After all the preparations were made, Captain Hunnigan and his crew set off towards the Distant Planet, right on schedule.

As PNF-404 floated into view, Hunnigan and his crew gazed in awe and wonder at the green-and-blue marble. As the crew prepared to enter the planet's atmosphere, a mishap occurred, which resulted in the S.S. Dreamstride plummeting toward's the planet's surface. The fiery spacecraft fell from the sky and crashlanded in Ancient Metalworks, creating a crash so loud it scared away every lifeform, Pikmin or otherwise, present in the area for a few days. Everyone on board suffered injuries ranging in severity from light to heavy, but none were life-threatening. Captain Hunnigan and a few members of his crew explored the small and seemingly safe enclosure they found themselves in and explored what little they could of the surrounding environment outside of it.

It wasn't long until one of the crew members noticed a strange, stationary lifeform nearby and alerted the rest of the group. It had a round, purple main body with a flower on top, and it stood on long, slender yellow legs that glowed in the sunlight. It didn't appear capable of causing any harm, but Hunnigan and his group were still prepared for an encounter with a potentially hostile creature. Hunnigan gathered his group together and reminded them that power is in numbers, and emboldened them by telling them to stand their ground. The entire crew stood shoulder-to-shoulder and marched up to the creature. After some time of standing before the lifeform, a lone Purple Pikmin emerged from it and slid gracefully down one of its legs, for the creature was a Purple Onion. The sudden action made the crew jump back slightly, but they were still braced for a fight. The Purple Pikmin tried its best to hide behind one of the legs to peer at the crew, which returned the gaze given by the small humanoid creature. Eventually, the Purple Pikmin could no longer resist its curiosity, and emerged from behind the Onion's leg, slowly and cautiously approaching Hunnigan and his crew. It stopped just a few feet short of them, and then put a hand on its chin and thoughtfully tilted its head to the side, emitting a sound indicative of inquiry.

At this point, Hunnigan and his crew realized that the strange little creature nor the being it emerged from was dangerous. More Purple Pikmin emerged from the Onion, and although the crew was more than ready for a conflict, they knew deep down inside that none of the creatures meant any harm to them. After a tense standoff, both parties closed the distance between them and befriended one another. As night fell, the Purple Pikmin returned to their Onion while the crew retired to their campsite to eat and rest, waiting for rescue. As days passed, individual members of the crew explored the surrounding landscape with a small squad of Purple Pikmin in tow. 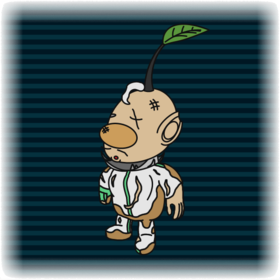 On the fourth night since the impact, dangerous predators began to return to Ancient Metalworks in search of prey. The entire crew was awoken by the sound of ravenous beasts invading their campsite. Crew members who were sleeping outside were devoured before they could fight back or outright react, and those inside the wreck of the S.S. Dreamrunner, including Captain Hunnigan, were not much safer, for the beasts effortlessly tore apart the ruined spacecraft to devour the helpless prey within, no matter how many punches the crew members threw at them. Captain Hunnigan and others that fled the scene all congregated at the Purple Onion, hoping the friendly helpers would emerge to help them. A meager twenty-seven Purple Pikmin is all they had to help them, and the efforts to fend off the creatures of the night were all for naught. Nearly every Pikmin was killed and all but one crew member was either devoured or mortally wounded, their bodies later consumed by scavengers.

Marie was the sole survivor of the entire massacre, only having been knocked away to an otherwise inaccessible location no predators could reach her and where she could not see nor hear her friends and idol die horribly. Captain Hunnigan was a bit less fortunate, as he was mortally wounded, and crawled to a safe spot in the wreck of the S.S. Dreamrunner, where he eventually expired due to oxygen exposure and blood loss. Because the Purple Pikmin saw Captain Hunnigan as a gifted leader, they brought his body to their Onion and had him reborn as a Captmin.

Olimar, Shacho, and Marie eventually encounter Hunnigan when they enter the crew's impact site. Hunnigan emerges from the remains of the S.S. Dreamrunner, and Marie approaches him, amazed to see him again but bewildered that he survived and that he resembles a Pikmin. The three explorers discuss the possible fate of Hunnigan, mentioning Marie's recounting of the event, context clues in the immediate area, and previous encounters with Captmin. Marie takes the data file Hunnigan was holding, which he seemed to be offering to her. She read it and was moved to tears upon learning she was his favorite student and that he wished for her to continue fighting because he knew that she was a strong warrior deep down inside. She was also overcome with grief over the loss of her friends and idol. However, some closure to the events of that fateful night brought her some happiness, and her trust in Olimar and Shacho strengthened significantly. As soon as he is found, Hunnigan is like any other Captmin. Although he must be left behind at the end of the day he is found, he can be reunited with in the campsite after a few in-game days have passed.