Hey! Pikmin 2 is a 3DS spin-off game made by Sapphire7. While not having relation to the main games, it is canonically the sequel to the 2017 game Hey! Pikmin. Rather than focusing on Olimar, it focuses on his partner Louie. Many of the previous game mechanics are brought over into this one.

After returning home from his previous adventure on PNF-404, Captain Olimar gets a message from The President, and realizes someone has made off with their prized Golden Carrots! While going to see the President, Louie arrives with said carrots and sneaks onto the S.S. Dolphin II when they weren't looking, and flies off of Hocotate before they could stop him. While flying through space, he gets distracted by the carrots and he starts eating them. During this though, his messy eating gets the debris on the control panels, causing them to malfunction and losing control of the ship.

The ship crash-lands onto PNF-404, making Louie fly out of the ship, along with all of the Golden Carrots with him. This makes him panic before the ship tells Louie about the damage on the ship and insists they go back for repairs. However Louie refuses and goes off to search for the carrots instead. The S.S. Dolphin II senses the Golden Carrots but only faintly as they are scattered all over the place. While looking around, he stumbles on a small group of Red Pikmin, who're carrying one of the Golden Carrots. Soon Louie gets the carrot back, but the S.S. Dolphin II reminds him there's a lot more to look for.

With the help of the Pikmin once again, Louie must travel PNF-404 to find the missing Golden Carrots while making amends to the damaged S.S. Dolphin II.

Many of the game mechanics are brought over from the previous game; the touch screen is utilized and is impossible to get a Pikmin extinction, but with a few additional mechanics put in: 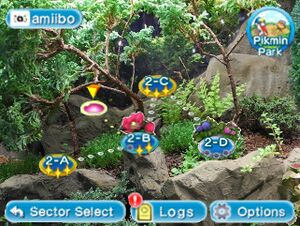 Much like the previous game, Hey! Pikmin 2 is split between sectors and set up in a similar fashion: the ship's pod drops the player off at the beginning of the stage and picks him up at the end of the stage. Each sector has four main levels with a boss level, and one secret spot. These secret spots are unlocked through a secondary exit reached in a specific level

Enemies that appear in this game mostly carry over from the previous game, but there're some new creatures brought into this as Hey! Pikmin 2 exclusives. While some of these enemies appear throughout the game, some are restricted to specific sectors and even specific levels.