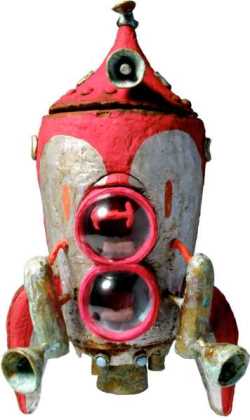 The ship is the common name for Olimar's new rocket in Pikmin 2. It is not named in-game, so it is simply referred to as "the ship"; all that is known is that Olimar sometimes refers to the ship as a "he". Unlike the S.S. Dolphin, the ship is capable of speech and takes on the role of giving advice throughout the game. Olimar makes his opinion of its personality being pompous and smart-alec known in his notes. Once the debt is repaid, the ship is upgraded into a sleeker, golden model.

The ship can store Pikmin, and does so, storing both White Pikmin and Purple Pikmin. Unlike the Dolphin, the leaders cannot check how many treasures have been collected using it nor restore their suit's damage meter. Standing in the green light and pressing A before Purple Pikmin have been found does nothing. The ship has two cockpits, and is capable of deep space communication, sending a report each night to Hocotate and receiving mail. To do this it must be in orbit around the Pikmin Planet. The ship can dispatch a Research Pod for traveling underground.

When traveling underground into caves, the ship dispatches its nosecone, known as the Research Pod, and sends it with you into the cave. It is used to store any treasures and enemy carcasses to be sold to pay off the debt upon exiting the cave. In emergency cases, it can empty its cargo, take in Olimar, Louie and the Pikmin, and return to the surface; should this happen any carcasses and treasures collected are lost.

This is where users type their version of the Hocotate ship. Also, in Pikmin: The Rising Darkness, it has an upgrade, called the Sub, which allows it to accompany Olimar underwater.

In Pikmin 4, The Ship is redesigned and renamed the Hocophin. It is a combination of the Hocotate Ship and the Dolphin, thus giving it its name, Hocophin; Hocotate ship + Dolphin.

The Ship is an item in Pikmin Kart. When used, you fly forward and the Ship navigates for you, so you don't have to control your kart for a short time. Any karts hit by you when you're using the Ship are stunned temporarily. This item appears more often if you are not doing well in the race and therefore have a low place. 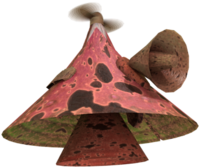 The Hocotate ship, specifically the research pod, provides an important role in Pikmin Forever. After Captain Olimar's rescue ship is compromised, he finds the research pod on the first day in the Daybreak Glade. With Olimar's rescue ship's damaged battery installed, it serves as a makeshift spaceship, carrying him to a low altitude each night as long as its battery is charged using 250 metal units of fuel. Eventually, Loucap shows Olimar that the remainder of the ship still exists in 16 parts, which must be collected if the Hocotate ship is to reach the Forbidding Precipice. In this area the previously crashed KHA Lander is found, after which it becomes the primary ship. The KHA Lander's scanners need 2500 metal units of repairs to find Edward, however. With 100 Purple Pikmin, the explorers can salvage the entire Hocotate ship (it has a weight of 1000) as a metal object called the Saluted Sourpuss for all 2500 metal units. It is the heaviest and most valuable metal object that can be carried during gameplay. Of all metal objects, it is second in value only to the SOGNO.

The Ship reappears in Pikmin: Infection in Progress as the the President's rocket. Its appearance uses the same reflective gold color that it does in Pikmin 2 after the debt is repaid. However, it speaks very little in the game, as the only time it continuously speaks is when it teaches the player how to play Pikmin: Infection in Progress. It also warns what an environmental hazard does whenever one is encountered and interacted with for the first time.