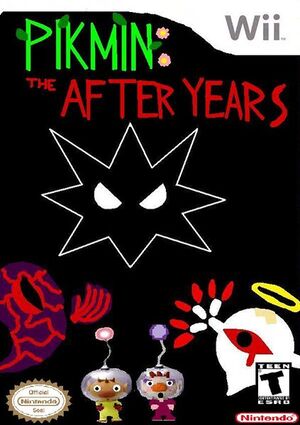 Boxart for the game

Pikmin:The After Years is a game created by Gamefreak75. This game has 7 areas, each with 4 caves. There are 500 treasures. There are also new enemies and many old ones. 3 new Pikmin are found. It is also the first game in the Dark Trilogy.

The President has retired and has given his position to Captain Olimar and Louie is on a vacation with his new wife, Luisa. Olimar's son and daughter have grown up and live on with their lives. Olimar decides to take a vacation with his wife and go to the Pikmin Planet. During his journey however, his ship is hit with a strong gamma ray that came from the planet. His ship then plummets to the planet, but fortunately stays in one piece. After the dilemma, Olimar realizes that the once beautiful planet of the Pikmin has become a barren wasteland. He then notices something shining on the ground..a treasure. He then discovers a lone Red Pikmin, whom explains how an explosion had caused this to happen and that some of his brethren are still alive, but he can't seem to contact them. The Red Pikmin also explains that there is a monster that is causing this by the name of Dark Virus who has stolen the Jewel of Life in order for his evil plan to spread dark matter throughout the universe. The Jewel of Life is what holds the universe in place and was kept safe in the Earth's core. By stealing this item, Dark Virus has caused the distortion of space and time. It's up to Olimar, his wife, and the Pikmin to stop this madness!

The game is for the Wii and will be rated T for minimal blood, scary images, mild violence, and language.

This game can use both the Wiimote/Nunchuck Controls and Gamecube controls.

Every enemy from Pikmin 1 and Pikmin 2 (except for the Titan Dweevil) return along with some from other games. A few also didn't make an appearance.

For a list of all the caves take this link: Pikmin: The After Years/Caves

For a list of the boss treasures take this link: Pikmin: The After Years/Treasure Hoard