Pikmin Z is a fan-made game made for the Wii U by Sapphire7, that takes place some time after Pikmin 3. A PC adaptation was also made for the game, with PC exclusive content.

Pikmin Z begins with a view of a grown-up Captain Alph, flying through space in his new ship, the S.S. Dolphin 2. After working really hard, and earning his spaceship license, the currently retired Captain Olimar gives Alph his ship, and now Alph flies through the cosmos on his own explorations and missions. During his flight, Alph ends up catching sight of a familiar plant - PNF-404. It had been so long since he arrived there last, so for a thrill, he decides to fly down to the planet to explore. Unfortunately, as he flies overhead, the ship suddenly runs on empty and making Alph crash land on the planet's surface, his ship losing various parts due to the crash, and getting them scattered everywhere. Now alone, and with a broken and empty ship, Alph must get the aid of the Pikmin once again in order to get his ship together and fueled up, without getting himself eaten, or worse, trapped on the same planet.

To hide from enemies, you and your Pikmin are able to actually hide over in some places (shrubs/underwater weeds/etc.). If an enemy sees you, you can hide in these places and wait until they lose interest, which is determined by a meter at the bottom of the screen. These areas are more common within dungeons than above ground.

With areas in deep water, Alph and Blue Pikmin are capable of swimming, rather than just walking underwater. Some areas can only be accessed this way, and when items go through the water they can be lighter for Blue Pikmin to bring to shore.

Pikmin Z has included a new "Nighttime" mode, in which the player can still explore the areas during nighttime hours. Instead of automatically being moved back into your ship at sunset, you're able to remain in an area as long as you please until you decide to return to the ship. The areas automatically turn to morning whenever you go to a new area.

Unlike the other games, which consist of one main area, the areas in Pikmin-Z are made up of overall locations with two distinctive areas to explore within each.

the ever-lasting sea of grass just outside the Evergreen Copse.

The Evergreen Copse is an isolated patch of forest where Alph first finds himself. Much of the area is meant to be a tutorial stage for the player for the first day. Much of the area is easily accessible, and it doesn't suffer many dangers apart from smaller creatures, though a Mamuta can be located within the copse every five days. Patches of water are also located, some of which have treasures that can only be accessed after gaining the Blue Pikmin. There're no main threats during the nighttime sequences, however, as the only main thing becoming more active is the Bulborbs. While not the first spot for true Pikmin, you are able to see your first Titan Pikmin, which carries the main body of your ship to you near the end of the tutorial.

The Seagrass Plains is an open expanse of grassland, and while you can only explore a portion of it, the S.S. Dolphin II states that it surrounds the entire copse. It's here where the first Red Pikmin is located and as a part of the tutorial, where your first accessible treasure can be gained. Standard threats can be found here, albeit much larger when compared to the Evergreen Copse due to the more open space, and after day twenty, more flying enemies as well. There's also a small area, where after returning with Rock Pikmin to break down a rock wall, you first meet with Yellow Pikmin.

The river flowing through Dewdrop Jungle.

Dewdrop Jungle is a thick, warm rainforest-like place close to the sea. A thick mix of freshwater from streams and saltwater from the coast make the area full of deep water for you to swim through, and the prime area to meet the Blue Pikmin and Rock Pikmin, and learn how to swim. A lot of enemies can be found here, more diurnal enemies than nocturnal ones, but aquatic enemies are first introduced here.

Neptune's Lake, despite being called such by Alph, is actually the bordering coastal waters to the sea. Unlike many other areas in the game, the coastline has few spots for any sort of cover. players are able to swim off shore, but there's still a barrier surrounding an area of the waters. The primary enemies here are found underwater, though some enemies can still venture out onto the sands.

The Toxic town is as the name describes it: a giant abandoned settlement from an unknown, ancient civilization that is currently left to rot away. Toxic town, as a singular area, is one of the largest and consists of abandoned buildings, only three of which you can enter and explore as others can be entered within dungeon missions. Patches of polluted water can be found throughout the area, which no Pikmin species are able to swim through with you. This is also the primary area for Rust Pikmin to be found.

An abandoned playground off south of the Toxic Town, it mainly consists of a large sandy area with numerous, rusty playground items: a swing-set, a merry-go-round, a jungle gym, three benches, two see-saws, and a picnic table with the main area within a sandbox. Only Nocturnal creatures are found here, many of which burrow under the sand or roost in the jungle gym. 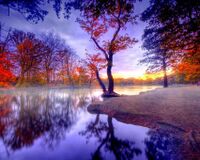 The autumn trees of the Painted Pines bordering the Luna Pool near sunset.

The forests of the Painted Pines are especially notable for the multi-colored leaves and thick amount of trees in the general area. The Painted Pines is where the first Clover Pikmin are located and collected. Being Autumn based, the Painted Pines have multiple leaves covering the surface, having the most numerous hiding spots of any other area, making it a good spot for the player to practice stealth.

The Luna Pool is the central lake of the Painted Pines, and the second-largest body of water behind Neptune's Lake. Being fully freshwater, most enemies are semi-aquatic in this pool, and treasures here can only be accessed by Blue Pikmin.

One of the wooden paths of the Avalanche Desert during the morning.

The Avalanche Desert is the open plains in thick winter, with many paths covered in thick snow. Unlike most of the areas, the enemies here are mostly Diurnal rather than nocturnal, mainly because nighttime hours are far too cold for most creatures to remain at the surface. Due to a lack of plant life, for the most part, players and Pikmin are exposed to many dangers. As the name implies, the area is prone to snowy avalanches, something more notable during the dungeon missions but can occur on the main map too.

You'll know when you find it when the snow begins to turn into nothing but dry, hard land, which borders the Lonely Pond. Like Neptune's Lake, the Lonely Pond is actually purely saltwater, which explains why it hasn't frozen over. There's little life in the pond itself, and those that do are especially ready to attack and eat some juicy, tasty Pikmin. This is the last area in the game's story mode.

Aves Isle is an unlockable area exclusive to the PC version of Pikmin Z. The area is an Island one can see off the coast of Neptune's Lake, and it can be unlocked after collecting all nine Feathers throughout the game. The island is the home exclusively for the Mockiwi Family: a PC exclusive enemy group, and they can't be found anywhere else in the game. No dungeons are found here, but a number of treasures are still collectible there.

The enemies within Pikmin Z behave a bit differently when compared to the previous games, as Pikmin Z shows them during the nighttime as well as daytime. Various enemies from Pikmin - Pikmin 3 make a return in the game, and a number of new enemies make their debut. Some of the enemies can only be seen either during the day, or during the night depending on the creature, and some enemy behaviors alter during the time change. The Mockiwi Family from Hey! Pikmin make an appearance in the PC version, including some species that didn't make it in the Hey! Pikmin final game.

In the PC version of Pikmin Z, you're able to collect various colored feathers throughout the areas in the game. There's only one feather per area, each one in very difficult, well hidden spots on the map. The S.S. Dolphin II won't include the Feathers in the ship's log, but instead an icon will appear on the right corner of the map screen to show you've collected a feather from said area.

The ship parts for the S.S. Dolphin II are the required items needed to repair the ship in order to get Alph back home. Each Ship Part is at the end of a boss fight per area.