The beeb family is a family of creatures that typically have glowing orbs as bodies, four slim legs, and eyes with stalks. 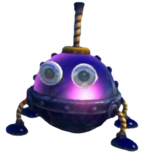 The Bombardier Beeb is an uncommon variant of Beeb that explodes when disturbed, similar to a Volatile Dweevil.

The Greater Bladed Beeb is the first discovered Greater Beeb. Its body has two purple orb segments: the head and the abdomen. It highly resembles a praying mantis with blades for hands.

The Greater Studded Beeb is essentially the same thing as a Greater Bladed Beeb, but with spike balls for arms and being more challenging to defeat.

The King Beeb is a lot larger than normal Beebs but functions similarly, rolling around while attempting to crush Pikmin and Leaders. 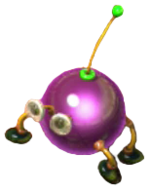 The Worker Beeb is the most common Beeb. They come in a variety of sizes but are generally very small. They attack by ramming into Pikmin and Leaders, and can be easily killed.