Cyan Pikmin are Pikmin that are normally resistant to the hazard of ice or cold temperatures, but their appearance, abilities, and resistances may vary between games.

This is where users type their version of Cyan Pikmin.

In Pikmin 3: The New Exploration

Cyan Pikmin in Pikmin 3: The New Exploration are discovered in the Arctic Valley. They can melt snow and ice and can become flowered merely by storing water in their stem.

In Pikmin 4 (Wii U), Cyan Pikmin are discovered by Alph at Silver Lake. Cyan Pikmin are resistant to ice and cold. They are light blue and have a crown of ice on their head.

Cyan Pikmin, also known as Arctic Pikmin, are a type of Pikmin said to be found in Pikmin Chronicles. They are light blue in color and have greyish-white fur covering a majority of their body. They also have squinted eyes that are slightly green in color. Cyan Pikmin are resistant to ice and water, but their attack power is decreased while in water. If an enemy eats a Cyan Pikmin, that particular enemy will take a longer amount of time to chew and swallow the Pikmin, allowing a chance to attack the enemy and save the Pikmin. They are about the same size as Pink Pikmin. Being a subspecies of Blue Pikmin, it can coexist with them inside the Blue Onion.

Cyan Pikmin, in Pikmin Galaxy Adventure, are resistant to water and poison due to their color being light blue, making them very useful for crossing poisonous water. They are also resistant to ice and mist.

Cyan Pikmin are the only Pikmin type immune to Puffstool spores in Pikmin: Advanced Online. They have a mushroom cap at the end of their stem instead of a leaf, bud, or flower. They do have an Onion, which is found in the area Big Mall. They are the only Pikmin found there.

In Pikmin: Attack of the Breadbugs, Cyan Pikmin, their respective Onion, and Teal Candypop Buds can be found in the Land of Wonders, more specifically the Arctic Territory. Cyan Pikmin are immune to being chilled, an effect produced by both Freezerburnt Breadbugs and cold water. Cyan Pikmin, upon entering cold water, will not be chilled, but can still drown. Conversely, Blue Pikmin can not drown, but will become chilled.

In Pikmin: The Big Trip

In Pikmin: The Big Trip, Cyan Pikmin are the seventh Pikmin type discovered.

In Pikmin: Connection of the Worlds

Cyan Pikmin appear in Pikmin: Connection of the Worlds, and are discovered in sublevel three of Icicle Abyss. Their skin is cyan, but it's hidden by thick fur, which is also cyan. Their bud or flower is dark blue, and the center of their flower is yellow. Their thick fur allows them to trap body heat, which makes them warm enough to be unaffected by ice and snow hazards. It should be noted, however, that since they lack gills like Blue Pikmin, they will drown in water.

In Pikmin: The Dawn of Petals

Cyan Pikmin in Pikmin: The Dawn of Petals have big ice crystals on their head to shield them from the heavy snowfall. They have tiny hairs all over their body, despite that they look almost fully smooth, and they prevent it from cooling down.

Cyan Pikmin appear in Pikmin: Distant Planet. They have light blue skin. Their leaf has a slight blue tint because it stores water, and the petals of their bud or flower are blue. When striking a metal target, a Cyan Pikmin's stem will spray it with pressurized water blasts, causing it to rust and become destructible. In addition, they can also siphon water from an icy target to eliminate snow or ice. If Cyan Pikmin sprouts are showered by water, they bloom into the flower stage of maturity. Due to siphoning water with their leaves/buds/flowers, they cannot be drowned since Pikmin drown when their leaves/buds/flowers are covered in water. 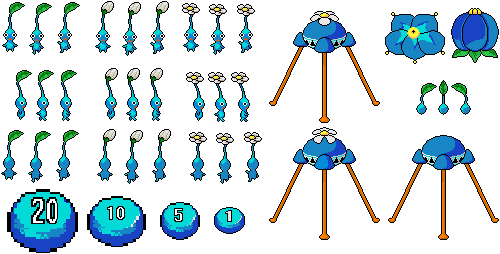 Cyan Pikmin in Pikmin: Mysterious Raiders are discovered at the Twinkling Spring. Their skin is light blue. Their leaf has a slight blue tint to it because it stores water, and their petals are blue. As Cyan Pikmin strike a metal target with their stems, a blast of pressurized water rusts it so it can be broken apart. Similarly, Cyan Pikmin can siphon water out of an icy target, allowing them to melt snow or ice. Upon being struck with water, Cyan Pikmin sprouts will instantly bloom to the flower stage.

In Pikmin: Planet War, Cyan Pikmin create light, which emanates from their eyes and leaf, bud, or flower, or in this case, stub, small glowcap, or large glowcap. Cyan Pikmin are very useful in dark locations, and are discovered in Dark Canopy.

In Pikmin: Return to the Distant Planet

Cyan Pikmin are discovered in Glacier Bay in Pikmin: Return to the Distant Planet. They are light blue, and they have an ivy leaf. Their bud or flower has red petals. Cyan Pikmin are resistant to ice and can clear away cold mist. They have a higher damage output than normal.

“I have just discovered another type of Pikmin. These Pikmin seem to be resistant to the cold and freezing ice. I shall call them Cyan Pikmin, after their light shade of blue.”

Cyan Pikmin are the ninth and last Pikmin discovered in Shadow Planet and are found at the Coastline. They are light blue in color, with a nose similar to a Red Pikmin's. They can break ice.

Cyan Pikmin appear in Pikmin: Spectrum, and they are born from the Cyan Onion and Teal Candypop Buds. They resemble standard Pikmin but with a few differences: to protect themselves from the cold, they developed a layer of soft fur around their entire bodies, which has the feel of cotton, and their leaf, bud, and flower are lavender in color and have a soft, felt-like texture. They share some anatomy with Blue Pikmin, mainly a tiny dot-shaped mouth where they blow cold air, and their heights are similar. Cyan Pikmin store cold air inside their organs, which they breathe out over watery surfaces to create temporary paths. These paths can be traveled on by all Pikmin types, allowing free movement over water. Cyan Pikmin have standard statistics all around, but they have a speed advantage when fighting on surfaces with bad traction, such as ice or grease, becoming almost as fast as White Pikmin. Cyan Pikmin are immune to ice and ice-based obstacles such as blizzards and cold vents but are very weak to fire hazards, as fire will incinerate them instantly. The Cyan Pikmin is the winning result of the first Pikmin creation contest in the Pikmin: Spectrum thread on SmashBoards.

“Like how Red Pikmin gained immunity to fire, Cyan Pikmin gained immunity to ice. Strangely, these creatures share anatomy with Blue Pikmin, such as vestigial gills, which are repurposed as a sort of cold sprayer. My theory is that a population of Blue Pikmin became separated and natural selection caused these Pikmin to change their appearance. This planet sure has changed a lot since my last visit.”

In Pikmin: The Pollution

Cyan Pikmin appear in Pikmin: The Pollution and are discovered in Thunder Tundra. They have a light blue body which could possibly be covered in fur, and their eyes are purple. They have red petal on their bud or flower. Cyan Pikmin are resistant to ice and can detect hidden creatures using their eyes in a similar vein to White Pikmin.

“This Pikmin can resist even absolute zero temperature. It seems fluffy, like fur.”

“This Pikmin can resist even absolute zero temperature. It seems fluffy, like fur. I noticed that their mysterious purple eyes can detect living things. I found out when they found the Rock Pikmin.”

“This is quite the fascinating species! I can't believe how some succeed where others fail in nature. This species is used to the cold and is quite soft, like a pillow. Their vibrant eyes allowed them to find me even when they probably couldn't. I think this is my favorite of the Pikmin.”

In Pikmin: Theme Park, Cyan Pikmin are discovered in Tundra Town through their Onion. They are resistant to ice and, being the counterpart of Blue Pikmin, can swim in water, where their movement speed is doubled.

Cyan Pikmin in Pikspore are resistant to ice, water, and cold water. They are discovered in Cold Chasm and have fins running along the length of their back.

This is where users type their version of Cyan Pikmin.

Cyan Pikmin resemble White Pikmin in appearance, but are of average height, and have cyan skin and blue eyes. They can sense buried objects, such as treasures, which their special eyes. Their bud or flower is reminiscent of that of a cherry blossom. More Pikmin can be made into Cyan Pikmin by throwing them into an Aquamarine Candypop Bud.