Onions are the large, round lifeforms that act as nests for the Pikmin. Each Onion has a unique coloration corresponding to the Pikmin they contain. Certain Pikmin species do not have Onions.

In Pikmin 1 and Pikmin 2, Onions have brightly colored bodies with a black and white band across the midsection. On the top, there is a big flower, resembling the flowers that Pikmin have. Three stilt-like legs suspend the Onions out of the reach of hungry predators and provide access to the inside for Pikmin, and these legs are also apparently covered with tiny hairs. In Pikmin 1, Onions have different appearances before they are discovered. They are darker in coloration, have no flowers on top, and are partly buried. When approached, they burst with color, and the flower blooms and spins rapidly, pulling out the legs. In Pikmin 3, Onions appear as small, berry-like objects with three black-metallic joints. Out of these joints come three glowing root-like legs which allow the Onion to stand. At night, the legs completely retract and blue flames burst out of the joints, allowing the Onion to lift off into the night sky. Some of the Onions also clearly display their Pikmin type's characteristic element upon activation: the Yellow Onion creates a small burst of electricity, the Blue Onion drains out a large amount of water, and the Winged Onion's flower flutters erratically. When multiple Onions are discovered, they fuse together to become an even larger universal Onion that swirls different colors, depending on the type of Pikmin it holds.

During the daytime, Pikmin hunt and bring food, such as pellets or slain beasts, to their Onion, which in turn produces new Pikmin seeds. If there are few enough Pikmin on the field, the seeds are ejected and take root in the ground; if not, they are stored inside the Onion, along with any other Pikmin not on the field. Unlike in an area, however, the number of Pikmin that can be stored inside an Onion is unlimited. In the first two games, when night falls and all the Pikmin have returned, the Onion folds its legs and lifts off from the ground, presumably using its flower petals like rotor blades to propel itself into the low atmosphere, where it hovers until daybreak. In Pikmin 3, when it's ready to lift off, it retracts its legs back into its base and lifts off through a jet coming from the same chute it absorbs pellets and corpses the Pikmin gather.

Onions seem to have some level of sentience, in that if all Pikmin of the same color are lost, the corresponding Onion will produce a single seed the following day to prevent extinction. An Onion can also spit out a Pikmin seed if it detects that the only Pikmin available cannot be reached. In addition, they seem to "awaken" when a leader approaches them for the first time, and are capable of following the ship at daybreak. They know not to suck in leaders that are being carried.

When the Onions are first discovered in Pikmin and Pikmin 3, they are dormant. It is not known exactly what triggers this hibernation, though it's possible that a loss of Pikmin or food shortage may prompt the Onion to become dormant until conditions improve. Onions can hibernate even with the presence of their Pikmin still somewhere on the field. It seems that this dormancy does not hinder their awareness, however, as they can be seen struggling to dislodge themselves from the traps they are found in. Onions also appear to require light to function. Blue Onions also seem to be water-resistant, much like the Pikmin they house. 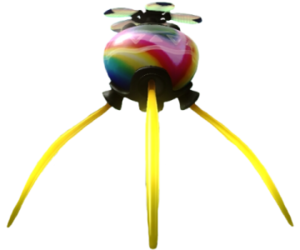 In Pikmin 3, all discovered Onions merge together the night after they are discovered, and become a single, universal Onion, greatly simplifying the management of Pikmin types at the beginning of each day. If a new Onion color is discovered, and Pikmin from that new type are left on the landing site at the end of the day, the Master Onion there will accommodate them until the Onions fuse at the end of the day. 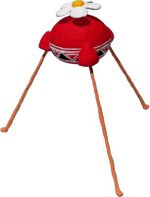 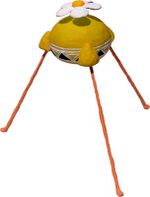 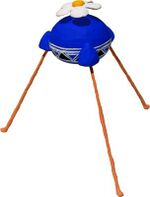 This is where users type their version of Onions.

Onions appear in New Pikmin IV in many different varieties. The new Onions are, listed in no particular order:

Additionally, Onions can merge together, and each of the six stages of this game's version of the Master Onion has its own name:

Onions play a pivotal role in Pikmin Forever. A large cluster of Onions hangs over a specific location high above PNF-404, with which both the KHA Lander and Captain Olimar's rescue ship collide. Captain Olimar is saved by a Red Onion, which becomes the first Onion to join him in the game.

Onions have a similar appearance to their design in Pikmin 3, but the triangle pattern on their side is no longer present, and their legs are now roots that actually root into the ground. Onions can dematerialize into their roots and travel their essence through the ground; this allows Onions to rematerialize inside of caves alongside Olimar's ship. Onions retract their roots to fly up with Olimar's ship at night; Onions merge at this time with the same sort of dematerializing effect. There are five Onions in the game for the five major Pikmin types: Red Pikmin, Yellow Pikmin, Mushroom Pikmin, Blue Pikmin, and Lichen Pikmin.

A wide variety of Onions appears in Pikmin V.

Onions make an obvious reappearance in Pikmin: Attack of the Breadbugs. As before, Onions will follow the Captain's ship into the sky when night falls. Onions merge together as they do in Pikmin 3 when night falls and the ship flies off. However, Onions can only hold a million of each species. By farming one million of each type of Pikmin, it is possible to earn seven million Pikmin in total.

In Pikmin: Echoes of Eternity 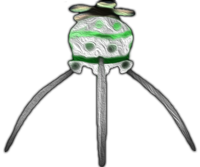 A new Onion named the Super Onion appears in Pikmin: Echoes of Eternity. It is green and grey and is a hybrid of plant and metal, and is discovered in Placid Plains.

In Pikmin: Infection in Progress

Onions reappear in Pikmin: Infection in Progress, and act as they once did in Pikmin 3. Once two Onions are discovered, they fuse together and act as one Onion when they take off towards the end of the day. This applies to additional Onions as well. There are five different Onions that are seen in the game, each belonging to the five Pikmin reunited with: Red Pikmin, Blue Pikmin, Yellow Pikmin, White Pikmin, and Purple Pikmin. 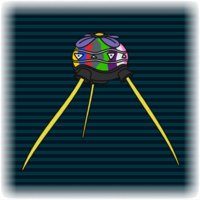 An Onion, in Pikmin: Wide World, is a living vehicle used by many types of Pikmin for reproduction, as well as shelter and protection from the various creatures inhabiting PNF-404. They share the color of the Pikmin it produces and the Pikmin that can inhabit it. Much like in Pikmin 3, after sunset, two Onions can morph together to form the Master Onion, which can create and store several Pikmin types. If the Master Onion already exists, other Onions will merge with it. Some Onions are dormant when initially discovered, but approaching them will activate them and cause them to dispense a single Pikmin seed that matches its color. Some Onions are also discovered separately from their respective Pikmin type. The more Onions that assimilate into the Master Onion, the more efficient of a Pikmin storage device it is. Parasitic Pikmin hosts do not have Onions and can only be found, but they can be stored in the PikHold, a ship part that allows the Dolphin Lander to act as a storage device for them. The PikHold can also house Purple Pikmin and White Pikmin until their Onions are found and have been merged into the Master Onion. Additionally, the Master Onion's petals change color to reflect how many Onions have been merged into it. The petals initially will be white in color, but they will change to a pink color when five Onions total have been merged together, and they will change again to an indigo color when all eight Onions have been merged together. Pictured to the right is the Master Onion in its final phase.