Pikmin 2: New Year is a Pikmin 2 ROM hack that was created by AmigaOwl, with the help of a development team, and was released on July 25th, 2021 to commemorate the twenty-year anniversary of Pikmin 1's release. It is available to play on computers, and can also be played on the Nintendo GameCube. The game has much of the same content as Pikmin 2, but features new music, areas, caves, cave themes, Challenge Mode stages, new or reskinned enemies, and one reskinned plant. Additionally, every treasure from Pikmin 2 appears in Pikmin 2: New Year, although the Time Capsule and the Talisman of Life differ in appearance.

Below is the official trailer for Pikmin 2: New Year.

In addition to a gameplay trailer, Pikmin 2: New Year has a soundtrack available to listen to on YouTube. It can be found here in the form of a playlist.

Pikmin 2: New Year's overall plot is identical to that of Pikmin 2's. Captain Olimar, in his prized ship, the S.S. Dolphin, returns to Hocotate to find that the company he works for, Hocotate Freight, has been placed under a mountainous debt of

× 10,100. The President sends Olimar and Louie back to PNF-404, in the Hocotate ship, to scavenge for treasures and any other valuables they come across. The two venture through various locations with their Pikmin, collecting what they can, and when the debt has been repaid, Louie wanders off and finds himself at the bottom of a treacherous cave's depths, on top of a Titan Dweevil, and the President takes Louie's place.

Likewise, the game also has both endings that Pikmin 2 has, both of which are possible to get in the same playthrough. 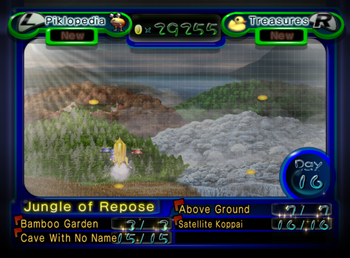 The area selection screen after having unlocked all areas.

Four areas each representing a different season may be visited, and each one has a number of custom caves.

The new cave themes consist of the following:

Same as in the original game.

The following is a complete list of every enemy and plant appearing in Pikmin 2: New Year, listed in the order defined by the Piklopedia.

One new obstacle is introduced.