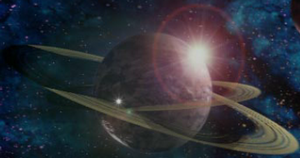 Hocotate is Captain Olimar's home planet. From what can be seen, at least part of the planet is desert-like, though the President notes a location known as the "Hocotate Swamp". The planet shows some signs of flora growing on its surface, including vegetables (Pikpik carrots for example). When viewed from space, the planet itself is colored purple and possesses a set of two intersecting planetary rings. Hocotate Freight appears to be in or near a built up area, which suggests that some parts of Hocotate are densely populated.

In the opening scene of Pikmin 2, Hocotate can be seen with two neighboring moons. An incredibly bright star can be seen behind Hocotate, which is its' sun, indicating that it exists in a different star system to ours. Stars are visible from the surface during the daytime, signifying a thin atmosphere. In a possible reference to urban Japan, a building resembling a capsule hotel is shown.

Hocotatian people are around 2cm (3/4 in.) tall, about the size of a nickel. It it uncertain what sort of gas they breathe as a means of respiration, though oxygen is known to be extremely poisonous to them; Olimar and Louie must protect themselves while on the Planet of the Pikmin by wearing a spacesuit. Because of this, there must be little or no oxygen in the planet's atmosphere.