This article is inspired by unused content in one of the canonical games. To learn more about its origins, see here.

For another dwarf bulborb with a blue rump, see Dwarf Lapis Bulborb.

This is where users type their version of the Dwarf Blue Bulborb. 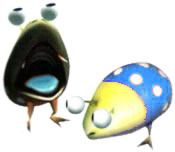 The Dwarf Blue Bulborb is a playable character in "Bulborb Game". It can eat lots of Pikmin and once and can hold its mouth open, but it is slow, has less health than a normal dwarf bulborb, and chews Pikmin slowly.

Dwarf Blue Bulborbs are no different than Dwarf Red Bulborbs except their less aggressive and they are always found in or around water. They are also smart enough to lure unsuspecting Pikmin into the water and drown them, something no other breadbug or bulborb does. They give five seeds when brought to the Blue Onion but give three seeds otherwise.

The Dwarf Blue Bulborb is the blue variant to the Dwarf Red Bulborb. It is the mimic counterpart to the larger Blue Bulborb, and only slightly slower than the red variants.

“The adaptability of the breadbug mimics knows no bounds, so it's only natural that the blue bulborb would have a dwarf variant. This breadbug mimic is often found in close proximity to each other and to their larger variants, yet none of them are found in aquatic habitats, indicating that they haven't evolved the semi-aquatic capabilities as the blue bulborb. This indicates that they've only evolved to mimic the younger forms beyond the mature species as younger blue bulborbs are incapable of breathing underwater.”

Dwarf Blue Bulborbs are a type of breadbug mimic appearing in Pikmin: Distant Planet. They are the smaller counterparts of Blue Bulborbs and are usually found near them, using the large beasts as a form of protection. This creature is evidence of the breadbug family's utter master of mimicry, even in multiple regions of the planet.

In Pikspore, Dwarf Blue Bulborbs are identical to the other dwarf bulborbs in everything but color. In addition, they have slightly more health and seem to occasionally play with nearby Snow Bulborbs. They are also sometimes summoned by the Darkfreeze's second form.

“A breadbug that mimics the blue bulborb, this small creature doesn't seem too different from the other breadbug mimics. It lacks the trademark retractable sail that the blue bulborb has, instead, it huddles up with other dwarf blue bulborbs to keep itself warm in cold regions.”