For the forum topic discussing the engine and its updates, see Forum:Pikmin Engine by Espyo.

Pikifen, formerly known as the Pikmin fangame engine, is a real program made by Espyo that is capable of creating and playing Pikmin fan content. It can be downloaded for Windows here, though it can also be run on Linux or Mac through Wine, or by compiling in those platforms.

The included README.txt file and the included manual have information on: 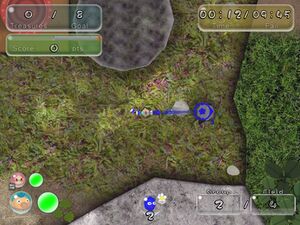 The gameplay is seen from a top-down perspective.

The project is an open-source engine, and currently under development. The engine can handle gameplay similar to the Pikmin games, in that it allows leaders to whistle and throw Pikmin, allows Pikmin to carry objects, etc. Although the idea is for fans to create their own content (enemies, areas, etc.) so the engine can read it and turn it into something playable, the current download also comes with some pre-packaged content, which makes it possible for people who download it to experiment with its features right away.

The game created by the engine has a 2-dimensional look, and is seen from an orthographic top-down view, although it is still a 3-dimensional game, in that height and gravity exist. The mechanics attempt to mimic those found in the Pikmin games, although not always to the same degree. They can be different because it's easier that way, it's better for the engine's flexibility, or because it's not possible to fully replicate what happens in the canon games.

Players can only currently select what area to play on, after which they are taken to that area and are free to play around with no objective. Win conditions, failure conditions, and progression will be added in the future.

Being a PC game, it is played using a keyboard, mouse, and/or a gamepad. Since it is still in development, some features may be fully implemented, missing entirely, or working incorrectly.

Pikifen and any fan content run within it are not affiliated with Nintendo® and should not be sold.

They are non-profit projects created by fans of the Pikmin® franchise, and do not intend to infringe on the copyrights or registered trademarks of Nintendo®.

Pikmin® is a trademark of Nintendo®. The copyrights of all associated characters, names, terms, art, music, and assets belong to Nintendo®.

The following images were taken from various versions of development with the pre-packaged area, Pikmin, etc.