Pikmin 251 is a Pikmin 2 ROM hack released on September 25th, 2019 by PikHacker and was developed by them with the help of a development team. It is playable on computers and the Nintendo GameCube. It takes place sometime after the events of Pikmin 2 and includes the standard game's features, but features new music and cutscenes, altered versions of the standard areas, one entirely new area, new caves and cave themes, new 2-Player Battle and Challenge Mode stages, a number of new enemies and enemies that have had their parameters tweaked, one new candypop bud, one new Pikmin type, new obstacles, and many new treasures.

Below is the official trailer for Pikmin 251.

In addition to a gameplay trailer, Pikmin 251 has a soundtrack available to listen to on YouTube. It can be found here in the form of a playlist.

After the events of Pikmin 2, Captain Olimar returned home to his family until one day, the President of Hocotate Freight called him into work for a meeting where he revealed that the company was once again in debt. The President believes that the All-Devouring Black Hole Loan Sharks dumped the treasures that Olimar and Louie worked to collect back onto PNF-404. Instead of the debt being

× 20,000. The President then reveals that Louie told him about Olimar's "dark secret" and how it was a cover-up story for having eaten the golden Pikpik carrots. Because the company is in such deep debt, he is unable to fire Olimar; he instead promotes Louie and makes Olimar his subordinate. Louie and his new subordinate, Olimar, board the Hocotate ship and blast off towards the Pikmin Planet.

Whilst searching for a spot to land in Wistful Wild, Louie collides with a branch, which knocks Olimar out of his cockpit and sends him plummeting to the ground below. Louie successfully lands the ship, which ejects him out of the spacecraft. Louie looks up to see a group of Yellow Pikmin fighting a Dwarf Painted Bulborb. He whistles them to his side and uses them to kill the creature. Olimar and Louie work together to reunite and continue their quest to pay off the company's debt once again.

When enough Pokos have been collected to pay the debt, Louie returns to Hocotate, not having realized he left Olimar behind. The President refuses to return to PNF-404 and makes the ship transform into a playable character. The S.S. Dolphin is used to return to the Distant Planet, and the final area, Foreboding Forest, is discovered. In it, Louie and the ship rescue Olimar from the Scrambled Titan Dweevil in the Doom Den. Eventually, Louie and the ship clear the entire planet of valuables.

Just like Pikmin 2, Pikmin 251 has two endings that can both be obtained in the same playthrough. One occurs when the debt is repaid, and the other happens when all two-hundred-fifty-two treasures have been collected. 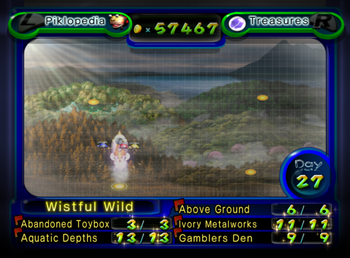 The area selection screen after having unlocked all areas.

The following are the four areas, each having four custom caves.

The new cave themes consist of the following:

Every Pikmin that appears in the standard game returns in Pikmin 251, although some have been tweaked. One new Pikmin type is discovered: the Orange Pikmin.

Orange Pikmin are a subterranean species of Pikmin that are obtained by throwing Pikmin into a Scarlet Candypop Bud. They are resistant to explosions and are characterized by the small, turtle-like shell on their backs. Orange Pikmin appear overall similar to White Pikmin.

The following is a complete list of every enemy and plant appearing in Pikmin 251, listed in the order defined by the Piklopedia.