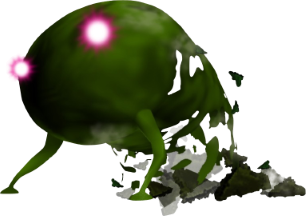 A few months after Captain Olimar's second visit, a lone pikmin is wandering along, when it comes across a large egg. The little creature was tired, and decided to take a nap on the large egg. Unfortnutely, for the little creature, it was a Progg egg. As it started shaking, the little pikmin jumped off and witnessed the large creature burst out. The tiny thing ran back to its onion to warn the others. Meanwhile, the Progg started digging in the ground, and soon he found another egg. After he found that one, he freed another Progg, and another, and another! The other proggs make him there leader, and then the war began. After the Proggs rampage started, nothing was safe anywhere on the planet, and they needed help, fast. Luckily, help was on the way. At that same time, Captain Olimar was being ordered to the Pikmin Planet by the science committee of Hocotate. They needed a few samples so they sent him back to earth. When he arrives, he finds several pikmin, quickly being defeated by an Electric Progg and are transformed into evil minions. After some quick advice from the ship, Olimar uses his whistle to override the brain-washing used by the Proggs. Olimar and these pikmin decide to try and stop the evil that has corrupted the planet. P2. after you destroy the main power generater,you find its to late! The king progg already has what he wants,the insanity portal! soon he opens it,causing all sorts of nasty beastys to roam free.

After you save the King Wollywog from possession by the Proggs, you can get on top of other Wollywogs and ride them. The Uber Progg is fought like this.

Throwing Pikmin now causes the Wollywog to jump. Whistle causes you to dismount.