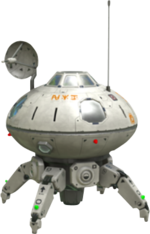 The S.S. Drake, simply referred to from the Koppaites as the Drake, is the main ship in Pikmin 3. It was built by and named after Alph's grandfather. Much like the other ships from the Pikmin series, it serves as the main storage unit for all the gathered objects found by the leaders. Its other purpose is to transport the leaders from place to place. Charlie is its captain and Alph is its engineer.

The S.S. Drake is not designed like a traditional rocket along the lines of the S.S. Dolphin or the Hocotate ship, instead being more closely resembling a lander vehicle, particularly with its communication antenna which sits on top of the vehicle, plus its much rounder and stouter body providing a living space on foreign bodies. It also appears to be far more advanced than either of them, as the vehicle contains a small satellite that is used for surveying purposes, and instead of sitting on fins on the ground, the vehicle features four extending landing struts on which it sits on the ground, plus a set of other minor details. Several pieces of Koppaite text are written on the outside of the Drake. 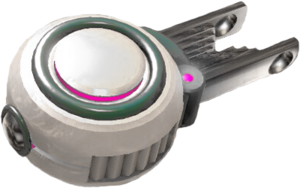 The cosmic-drive key is one of the most valuable parts of the Drake. It is necessary in order to achieve warp-speed, a maneuver needed to go from Koppai to PNF-404 and vice-versa.

This is where users type their version of the S.S. Drake.

The S.S. Drake has a minor appearance in the opening cutscene of Pikmin: Wide World, and is never seen after that. It is used by Alph, Brittany, and Captain Charlie to return Captain Olimar and Louie to Hocotate before they themselves return to Koppai to end the famine plaguing their planet.