The Burrowing Snagret appears to be a combination of a bird and a snake, and is a member of the snavian family. It remains underground for the majority of the time, surfacing only when approached by Pikmin or a leader. When above ground, it attempts to eat Pikmin one by one until it is sufficiently damaged, at which point it burrows back underground. In Pikmin 3, it can also stab its beak into the ground to eat a leader and then regurgitate them; if the attack misses, its beak will get stuck in the ground and be vulnerable to attack.

This is where users type their version of the Burrowing Snagret.

Burrowing Snagrets in Pikmin 4 (Wii U) are similar to how they are in Pikmin 3.

The Burrowing Snagret is a boss that appears early on in Pikmin Eco. It is slightly weaker though than in previous games, making it a fairly quick and easy boss to defeat. When confronted it will burst put of the ground and attempt to peck at Pikmin at least three times in a row before pausing for a bit, and burrowing back underground again. Only one can be found in Cloven Gardens in the Snagret Tunnels, but multiple can be encountered while going through the Rooster's Nest.

The Burrowing Snagret is a boss in Pikmin Forever. Its appearance is much the same as in Pikmin 3, but it reacts to changes in the environment and different species and quantities Pikmin. Its head can be brought down to the ground when weighed down by enough Pikmin, leaving a noticeable depression in dirt, and fabric in Challenge Mode, and visibly flattening grass. It eventually overpowers the offending Pikmin and lifts up its head once more after doing so. Purple Pikmin will bring the creature's head down quicker, while Winged Pikmin fail to bring it down at all. Depending on the material, a Burrowing Snagret's beak may become lodged in the ground if it misses a Pikmin. If this occurs with wood, small holes will be visible in it. A Burrowing Snagret can peck and eat Winged Pikmin out of the air if only they fight it. If there are fifty or more Pikmin in its vicinity, it will launch a surprise attack, which involves it quickly sprouting out of the ground in the middle of the squad, eating any Pikmin thrown into the air, seven at most, and flinging the squad in all directions. It also uses this attack when its health reaches one-fourth or less. Upon defeat, it falls limply to the ground and can be pulled out of the ground by ten Pikmin, or a single Purple Pikmin, and dragged to an Onion for twenty Pikmin seeds. 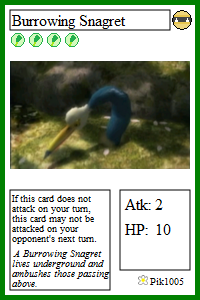 In Pikmin TCG, the Burrowing Snagret appears in the Pikmin 1 card set as one of the stronger cards in the set. It has the ability to avoid attacks if it itself does not attack.

In Pikmin: The After Years

Burrowing Snagrets in Pikmin: The After Years are as they are in Pikmin 1.

In Pikmin: The Bulblaxian War

In Pikmin: The Bulblaxian War, the Burrowing Snagret appears infrequently. One breaks down a stone wall at Base Camp, opening up the way to the Valley of Regret.

“For the first time in a while, I saw the Burrowing Snagret's tail. The tail is one way to distinguish it from the Burrowing Snarrow, which has a more fancy one. How snagrets got feathers and scales is still unknown.”

“I. HATE. SCALES. That's what makes this creature so horrific. Then there are the feathers. I don't want carpet beetles in my hold! They're harmful!”

The Burrowing Snagret, in Pikmin: Dimensional Breach, is a mix of how it is in Pikmin 2 and Pikmin 3.

“Duck and dodge the monster's beak, and be wary when it emerges. Aim for the feathered head, its weak spot. Yellow and Winged Pikmin are most effective against this fiendish creature.”

“Pluck off at least four feathers from the head, and dip them into colorful paint made from crushed candypop bud petals. Form a perfect circle from flexible tendons or treated leather tubing, weave the tight sinews of a Spotty Bulbear into a web through the center of the loop, and tie as many sinews to the bottom as there are feathers, leaving one end free. Tie the dyed feathers to the free end of the dangling sinews, and hang the entire construct above your bed to guarantee sweet dreams, even to those prone to life-threatening nightmares.”

﻿In Pikmin: New World, the Burrowing Snagret is slightly larger and has a slightly stronger tone to its scales. It can eat four Pikmin at once and has a slightly longer beak. It is a lot more of a challenge to defeat, about the same difficulty as in Pikmin 1. It serves as a boss in the Hot Tar Pools. Also, a relative of the Burrowing Snagret, the Long-Beaked Snagret, also appears as a boss in the Bird Tunnel.

“Chemical analysis of the burrowing snavian's DNA clearly shows how the hybrid creature originated from two separate species of different phylogenic classes. Lack of food resources may have caused birds to hunt for food buried underground, such as grubs or cocoons. This may have started them nesting on solid ground and laying their eggs closer to those of snakes. Eventually, a cosmic ray could have fused the two eggs into a single zygote, causing it to hatch into the first, primitive snagret. Other theories have suggested that the creature's evolution involved some form of egg parasitism between the species.”

“Slice its snakelike body into four, long sausage-shaped pieces. Strip all of the delicious bird meat that can be salvaged off of the head and fry its long tongue in sizzling vegetable oil until it is hard and crispy like bacon. Stuff the snake-meat sausages with cheese and butter and then wrap them all up into a roll of bird meat and simmer over a high flame with parsley and cyan pepper as well as an entire quart of olive oil! Don't forget to slap the bacon on top!”

“It's best placed within a large tank similar to an ant or worm farm so that its tunneling and hunting behaviors can be observed through the glass of the tank. From this perspective, it can clearly be seen that the snagret actually digs out a highly complex three-dimensional network of tunnels that it uses and reuses constantly when hunting. It should preferably be fed with worms or bird pellets. Snake food such as rats or mice can be fed to it alternatively. Just plain insects will do just as well.”

“This creature's luxurious emerald-scaled skin can be turned into boots, coats, vests, or purses. Its head feathers and beak make the best possible quality of headdresses and hats imaginable. Oh, the fame, the money, and the fans that await anyone who wears the clothing that this hybrid creature creates! Sadly, it is terribly expensive with prices soaring at over two million Pokos!”

In Pikmin: Wrath of Mr. B

In Pikmin: Wrath of Mr. B, Burrowing Snagrets appear as bosses in a number of caves as well as three areas of the overworld along with its cousin the Burrowing Snarrow.