Wogpoles are harmless amphitubers that resemble tadpoles in appearance, and are the young of Yellow Wollywogs. They are typically hard-to-get and yield little reward in that they are fast swimmers which produce only one Pikmin seed when carried to the Onion. While being chased, Wogpoles may sometimes accidentally beach themselves, flopping about helplessly until they land safely back in the water. Wogpoles may also be found on sublevels of certain caves, usually dropping from the ceiling.

In Pikmin 3, their skin is now a teal color instead of dark blue, and they flee directly away from approaching leaders instead of in random directions.

"The wollywog spawns in early spring, laying its eggs on low-hanging tree branches and shrubs growing in or near lakes and ponds. Such unorthodox amphibious behavior is a defense mechanism, protecting the eggs from predation by blue Pikmin and water dumples. The wollywog's wild hopping near the shoreline in early spring is thought to be a method of driving predators away from the wogpole eggs."

"Wogpoles can be eaten raw, but they're much more flavorful when steamed or grilled. Also heavenly in risotto! Feel free to experiment with this lush ingredient."

"Structural flaw: weak hide. It's built for one thing: swimming. On everything else, from engaging predators to environmental awareness, it kind of falls apart."

"You know the saying "It's more afraid of you than you are of it"? This is the only thing on this planet where that feels true. Something about getting close to this creature at all feels like cruelty to animals."

"Strange how such a scrawny pushover grows up to flatten Pikmin left and right. Then again, maybe it remembers being helpless and holds a grudge."

This is where users type their version of the Wogpole.

Wogpoles appear in Pikmin 2: New Year with the same behaviors, but an appearance reminiscent of Wogpoles in Pikmin 3. 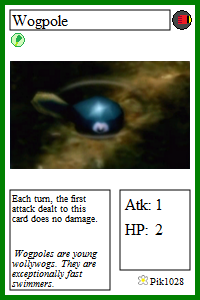 In the Pikmin 1 card set of Pikmin TCG, Wogpoles are a low-health and low-attack card but have the ability to avoid the first attack each turn.

In Pikmin: The After Years

In Pikmin: The After Years, Wogpoles are found in the Voluptuous Valley and Relentless Spring.

In Pikmin: Redemption, a Wogpole that is left alive for five days in an area will mature into either a Wollywog or a Yellow Wollywog.

In Pikmin: The Rising Darkness

Wogpoles in Pikmin: The Rising Darkness are found in Meaningful Meadows.

In Pikmin: Shadows of the Future

Wogpoles in Pikmin: Shadows of the Future are found in Emerald Plains.

In Pikmin: Sinister Incinerator, Wogpoles are found in Highland Field, Mountain Springs, and Ancient Wetland, as well as Aqua Labyrinth and Worlds Beyond.

Wogpoles in Pikmin: Ultimate Doom are found in Crystal Falls.

In Pikspore, Wogpoles are found in Altitude Springs in the watering hole section and Spectral Garden in the swamp section, as well as Challenger's Cavern, Mystic Marsh, and sublevel four of Concealed Aquatica.